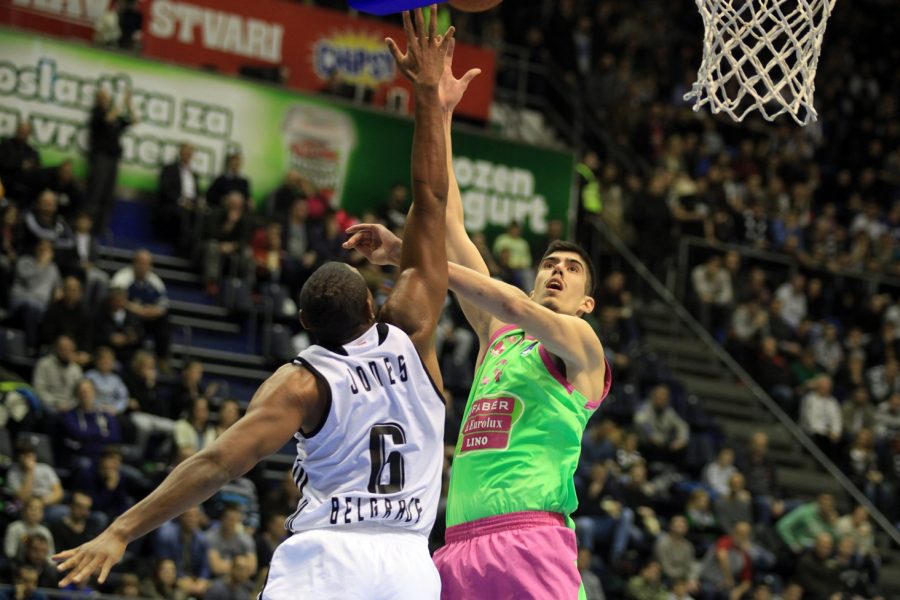 Players of Mega Leks will start from the second place in the playoffs because in the Hall “Aleksandar Nikolic” within the 5th round of Super League of Serbia, they lost to Partizan with 94:89 (20:16, 21:17, 21:29, 32: 27). Mega needed victory with more than 4 points difference to take up the top position in the group, but at the finish of the match groaned, as Partizan took advantage and came to win. Towards the end of the first half in a short period of time the joints hurt Nikola Ivanovic and Timothe Luwawu, after which they did not return to play until the end of the match.

Best in Mega were Danilo Nikolic with 29 points and 10 rebounds (7 offensive), Aleksandar Rasic with 19 points and 5 assists and Rade Zagorac with 17 points and 9 rebounds.

Dejan Milojevic started the match with the following five: Rasic, Luwawu-Cabarrot, Simeunovic, Nikolic and Zubac. At the beginning of the game Mega with several offensive rebounds took the lead 7:10. A series of Partizan 9:0 but Mega has managed to consolidate so the first quarter after a good cooperation of Jankovic and Zubac finished with 20:16.

Partizan hit the threes for plus 8, 30:22 but Luwawu returns it behind the line of 6.75. Zagorac in those moments maintained Mega in the game but at the end of the second quarter the wrist hurts Luwawu and then Ivanovic, after which they both did not returned until the end of the game. First half ended with 41:33.

The second half Mega started good with threes with Nikolic and Rasic back into the game but then came a great roll of Jankovic, who first score in a difficult position under the basket and then steal and dunk the ball for 48:48. Partizan with a new series of peels off at plus 9, 62:53 but Mega strikes back with 6 consecutive points of Nikolic and three of Zagorac in the last second for the tie before the last 10 minutes, 62:62.

In the last quarter players of Mege didn’t have enough strenght and with a series of threes, Partizan came to advantage which they managed to keep until the end of the match. Mega prior to the last minute reduced with the points Nikolic to 87:83 but Vitkovac hit the three which decided the winner.

In the last 6th round of Super League of Serbia on Tuesday 24th of May from 19 hours Mega Leks welcomes Borac Cacak and the entrance to this game will be free.