Players of Mega Leks have provided great resistance to the current champions of ABA league and leaders in Superleague but were eventually defeated by the Crvena zvezda with 86:90.

The audience in hall PSC Pinki in Sremska Mitrovica had the opportunity to watch a great match in which Mega had a chance to win up to the last minute of the game but at the end, guests remained undefeated. Mega Leks has a score 4-4 after 8 rounds while Crvena zvezda recorder all victories.

Dejan Milojevic started the match with Miljenovic, Zagorac, Krstic, Jokic and Sulovic on the court while Keselj and Musli were not able to help the team in this match. At the beginning the game was equalized and Sulovic opened match with five points. Jokic hit two threes for Mega Leks lead 13:11. Shortly after entering the game, Nikolic was injured but afterwards still came back to the team. Excellent defense of Mega was crowned with points of Webster for 23:15 at the end of first quarter.

The second quarter starts great for Mega Leks and after points of Webster, the result is 30:19. Crvena zvezda responded with two baskets but Zagorac answered with tough basket under the arm of Marjanovic. Crvena zvezda started hitting shots but Mega didn’t give up lead so half ended with Jaramaz triple for 46:40.

The second half started with a draw game and then guest scored a couple of threes. However, Mega replired and the result at the end of quarter was 71:65.

Crvena zvezda started fiercely last quarter but Mega went to 80:72 with threes of Jokic and Nikolic at just 5 minutes to the end. Guest leveled the score after the points of Dangubic. Sulovic hits one free throw after two offensive rebounds and received foul. Cirbes was accurate at the other end but Jokic restored lead with layup for 83:82. Marjanovic scored both free throws, Mega didn’t score and Jenkins was accurate in tough position for 85:88. Webster failed to hit the three, guest took rebound and the free throw line, ensured the victory.

The best in Crvena zvezda were Boban Marjanovic with 20 points and 7 rebounds and Charles Jenkins with 16 points.

Mega Leks hosts Partizan in the next match scheduled for Saturday 23th of May from 5:45 PM.

Dejan Milojevic:“Congratulations to Crvena zvezda, they have more quality. Marjanovic and Williams were unstopable and then Jenkins hit probably the winning shot. We raised our game and I hope to continue in that manner. As soon as we came to situation to get the win against Crvena zvezda in last 30 seconds, so I believe that we can win next matches that would mean a place in the ABA league next season“.

Nenad Sulovic:“I congratulate my team on fighting spirit. We fighted and were devoted until the very end of the game but it was not enough for victory. I congratulate Crvena zvezda for this win and I wish my team to continue in this rhythm because I believe that will get us the wins in next matches“. 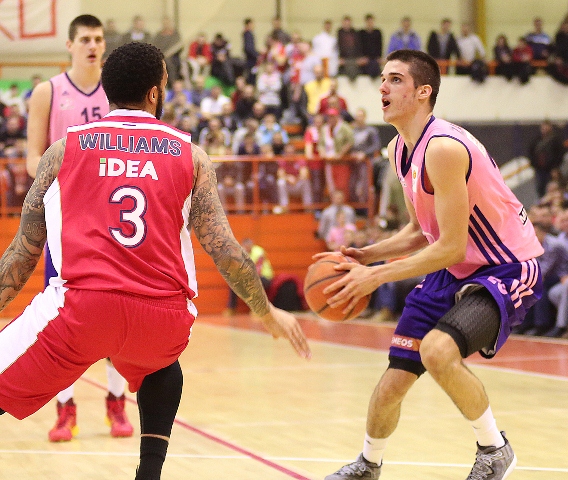