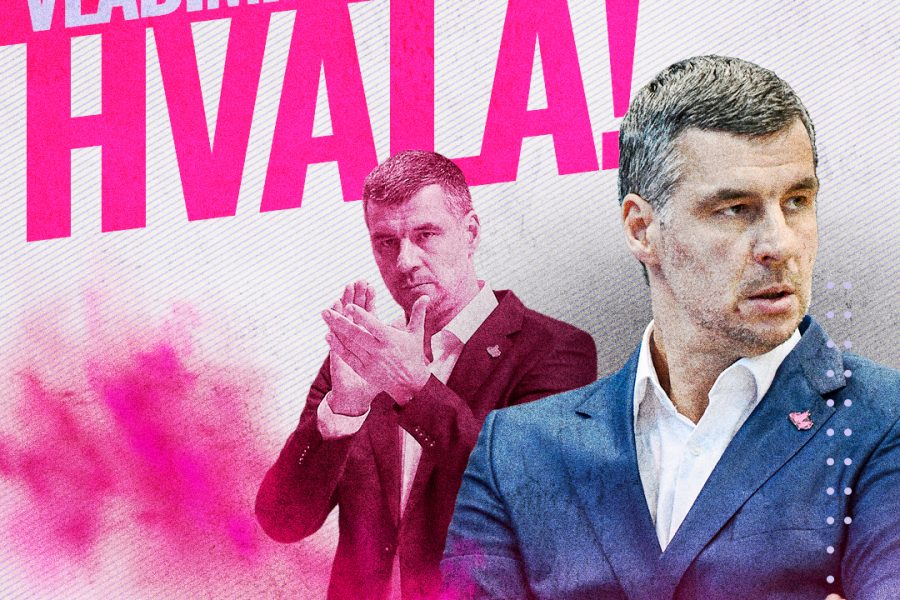 What was announced at the press conference after the third game of the semifinals of the playoffs of the Serbian Super League with Crvena zvezda, has been made official today. Vladimir Jovanovic ended his term as the head of the coaching staff of Mega Mozzart. After two extremely successful seasons in which the club had notable results, but also continued with the already established practice to form top players, Jovanovic and Mega are turning to new challenges.

At the farewell from the club, Vladimir Jovanović pointed out that Mega was and remained on the right path and that he is happy that he was a part of it:

– First of all, I would like to take this opportunity to thank the entire club and the Mega system, as well as General Manager Goran Cakic for two years of excellent cooperation and all the help and support I had during that time. Thanks also to all the players I worked with during that time. I would especially like to thank my coaching staff for these two years, my assistants Vule, Djordje, Dejan, Vladimir and Nebojsa, my fitness coach Marko, my physiotherapist Milos, as well as my former player and then Team Manager Milenko…. people who in those two years did a really big, intensive and serious job, where together with me they were practically available all day to these young guys and gave literally everything they had to make these guys both individual and collective progress. I thank them for their support and help these two years and I must say that I enjoyed working with them. Thank you to everyone in the club, from General Manager Goran, through the President, my coaching staff, players to the people who took care on a daily basis that we have all the necessary working conditions. Mega was and remains on the right track and I’m happy that I was part of it,

General manager of Mega Mozzart, Goran Cakic, pointed out that Jovanovic, with his dedication and professionalism, made a great contribution to the further growth of the club:

– On behalf of the club and on my own behalf, I would like to thank Vlade for the really great cooperation in the previous two years, it has certainly left its indelible mark of the work in Mega. With his dedication and professionalism, he made a great contribution to the further growth of the club, as well as to the great progress of both the players and the members of his coaching staff. He will always be a part of our Mega family and we wish him a lot of luck and success in the continuation of his coaching career,

Vladimir Jovanovic became the head of the coaching staff in June 2020. In his first season after great games, he won the 6th place in the ABA league, with placements in the finals of the Radivoj Korac Cup and the first final of the Super League playoffs in the club’s history. This season, in addition to several great victories in the ABA league (Partizan away, Buducnost and Cedevita Olimpija at home), with an additionally rejuvenated team in the Super League, he managed to finish the first part of the playoffs undefeated, while in the semifinals Crvena zvezda achieved placement in finals only after the third game

During his tenure, two players were selected at the NBA Draft, namely Marko Simonovia, who was selected as the 44th pick by Chicago in November 2020, as well as Filip Petrusev, as Philadelphia chose him as the 50th pick last summer. We believe that this number will increase even more, since Mega will have two candidates in the upcoming NBA draft, Nikola Jovic and Karlo Matkovic.

Thank you for everything Vlade, and good luck!