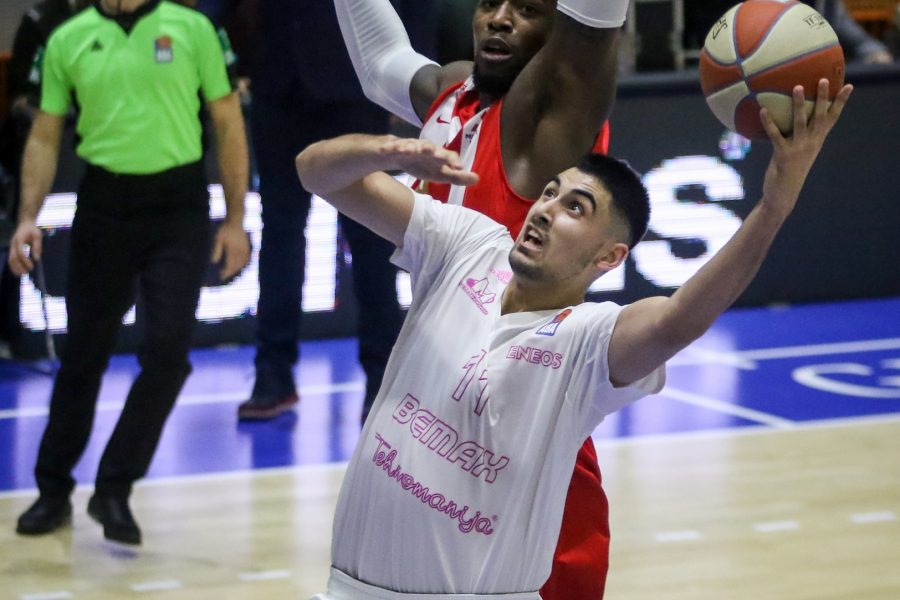 Basketball club Mega Bemax in the full hall PSC Pinki in Sremska Mitrovica within the 13th round of the ABA League did not manage to overcome Crvena zvezda mts since guests from Belgrade celebrated with 85:90 (25:24, 13:27, 21:15, 26:24). The crowd in Sremska Mitrovica had the opportunity to watch an excellent match where players the coach Dejan Milojevic, returned several times from the double-digit minus which went up to 22 points, but in the end they failed to get to the big win. The coach of Mega Bemax at this match because of injury could not count on Petar Aranitovic, Nikola Miskovic and Ognjen Carapic.

The best in the ranks of Mega Bemax was Aleksandar Lazic with 17 points, 15 rebounds and 3 blocks, while in the Crvena zvezda mts James Feldeine had 24 points. 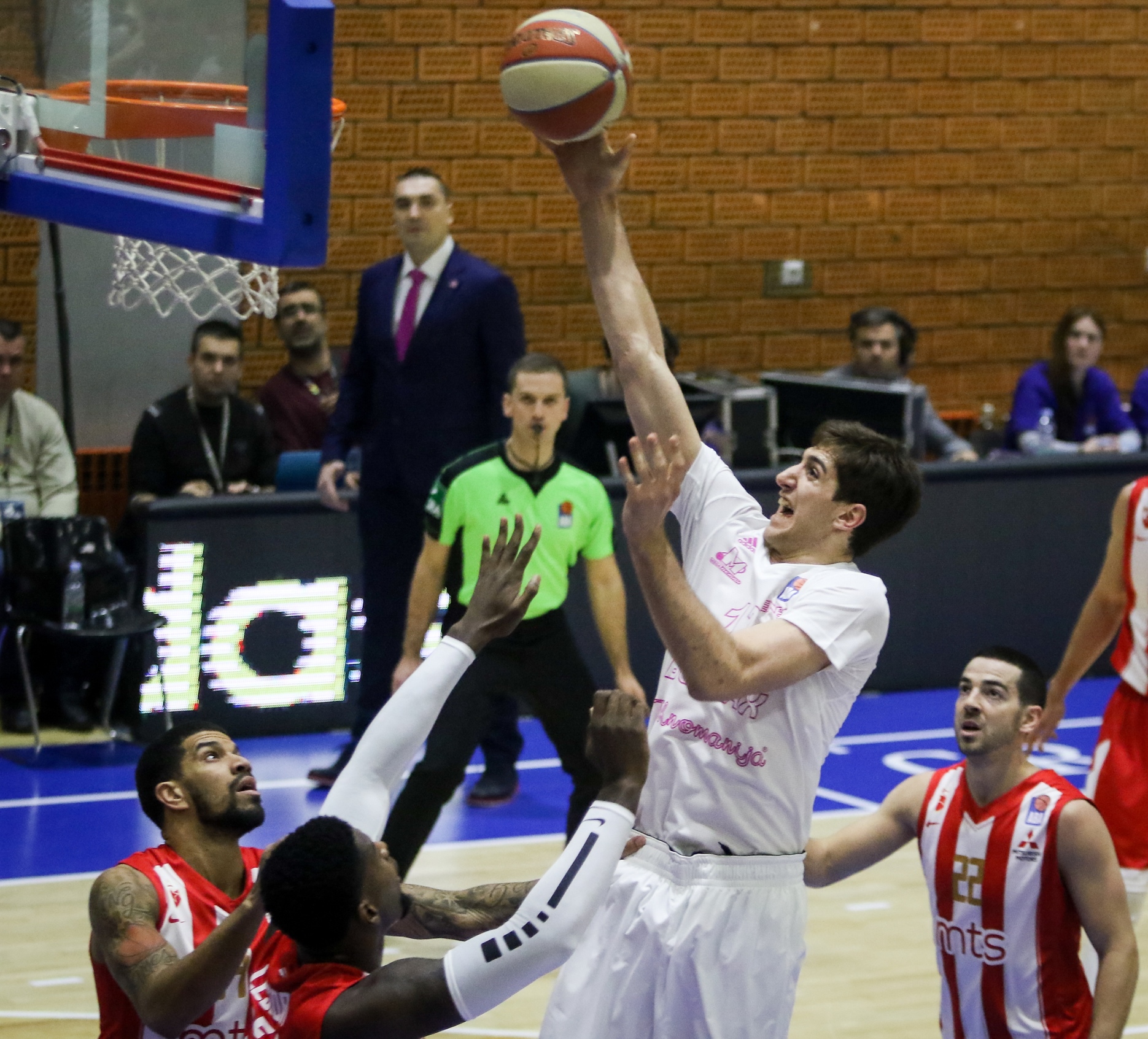 Basketball players pf Mega Bemax played the game against Zvezda in a special holiday set of jerseys, which were completely white, in line with Christmas and New Year’s holidays. Mega will the next three matches, until the Orthodox New Year, play in the same set of jerseys.

Before the match, the crowd in Sremska Mitrovica welcomed Dylan Ennis, former Mega’s player and now a member of the Crvena zvezda. On that occasion, Ennis was presented with a gift by the Chairman of the Supervisory Board of Mega Bemax Aleksandar Seratlic. 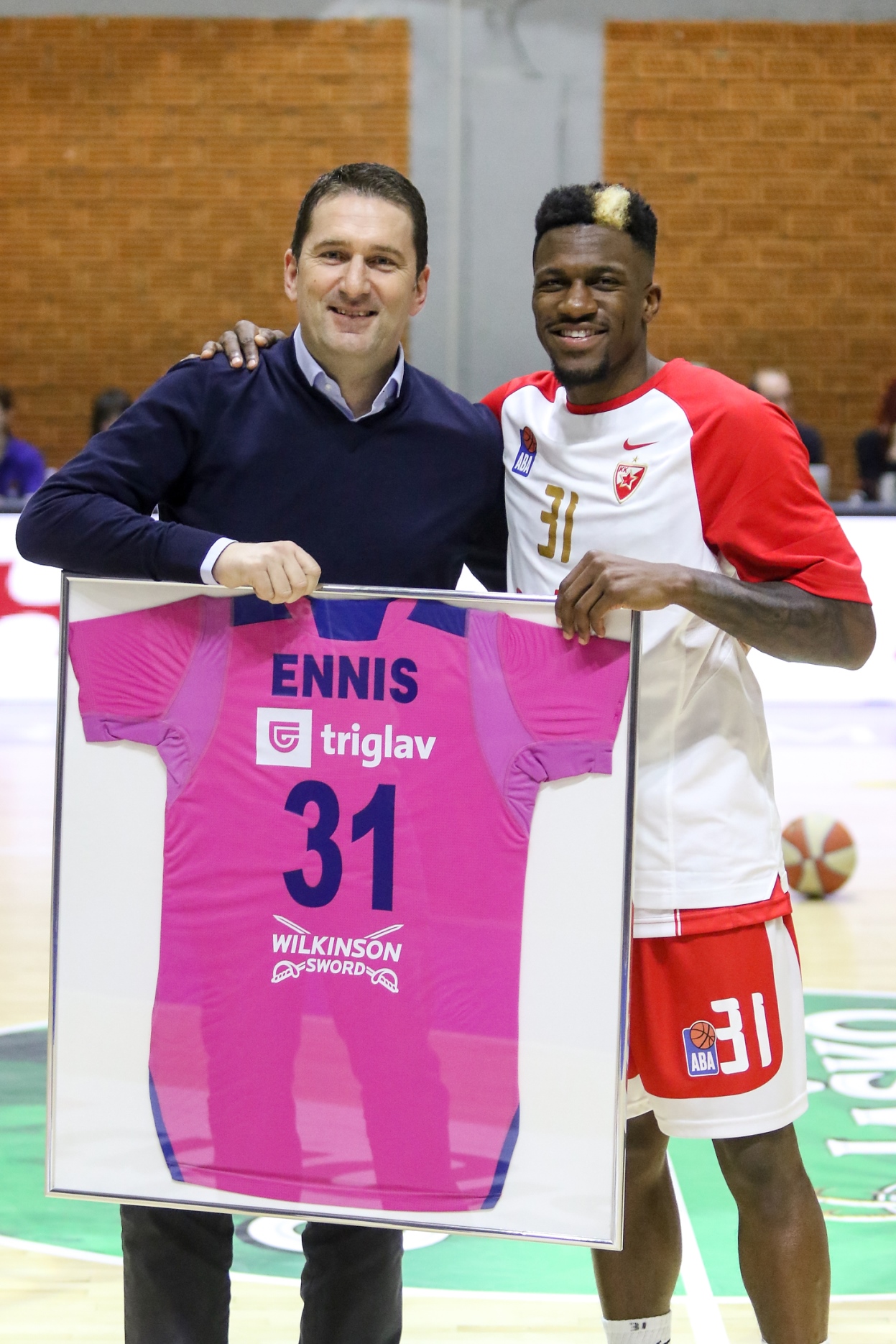 Special guests of this club were young basketball players from the Basketball Club “Joker” from Sombor, who’s named after nickname of Nikola Jokic, former Mega’s player and now Denver Nuggets. Also, guest of the club at the match were basketball players of ZKK Buducnost Bemax from Podgorica, who will together play on Tuesday the traditional New Year’s match of the club. Also the guests on the match against Zvezda were also the most successful competitors of the BeoBasket fantasy league.

After the 13th rounds, Mega Bemax has a score of 4-9 while the Red Star mts has 11 wins. Mega on Tuesday plays traditional New Year’s match in the Mega Factory hall in Belgrade, and by the end of the calendar year 2017, on December 30th, at 17:00, they will play in Bar against of Mornar.

Dejan Milojevic started the match with Rebic, Mushidi, Lazic, Cancar, Bitadze. The weaker start of the match for Mega was used by guests who led by 3:12. The series is broken by Cancar and Koprivica, but Zvezda makes a new series 0:7 for plus 12 after 6 minutes play. Koprivica and Jovicic brought in energy in the game of Mega, Lazic and Sinovec hit the threes, and minus quickly melted. Koprivica from the free-throw line equals the result, and then Jovicic hits the basket twice in a row from paint for 25:24 after the first quarter. 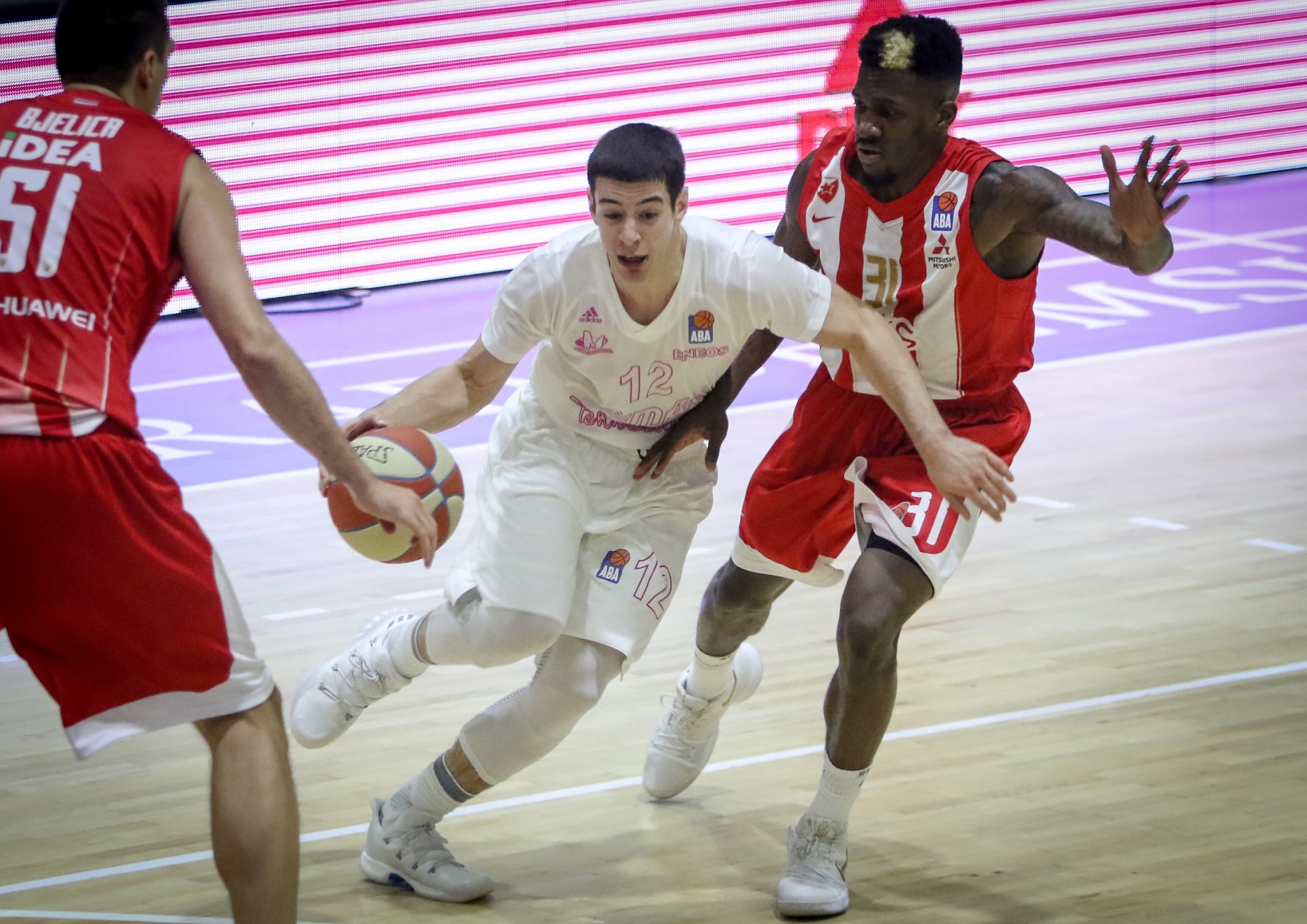 The first few minutes of the second quarter saw a matching game with the fantastic block of Lazic and the good reactions of Fundic under the basket. Bitadze enters a problem with personal fouls and guests from the penalty increasee the advantage and with three pointer of of Antic went to plus 11, 32:43. Sinovec and Cancar briefly moved Mega in the attack, but the first half ended with 37:51.

After the break at the half, guests from Belgrade continue to increase the difference over Feldeine, and after 3 minutes of the game was 38:60. Mega returns with a series of points over Bitadze and after the triple of Mushidi, the difference was lowered to 11 points, 51:62. Lazic continued with a great game on both sides of the court, so after his trio and laying the difference dropped to 5 points, 59:64 and in the last 10 minutes the score was 59:66.

At the beginning of the last quarter with points of Fundic Mega is reduced to only 4 points difference, but Zvezda through Feldeine and Rochestie returns plus 9. At 68:77 with the 5th personal Bitadze was played, followe little crowding on the field. Zvezda returns a double-digit advantage, but Cancar and Sinovec return uncertainty with 80:85 with 1:22 to the end. Still, Mega did not have the strength to win the game, Crvena zvezda eventually clinched 85:90. 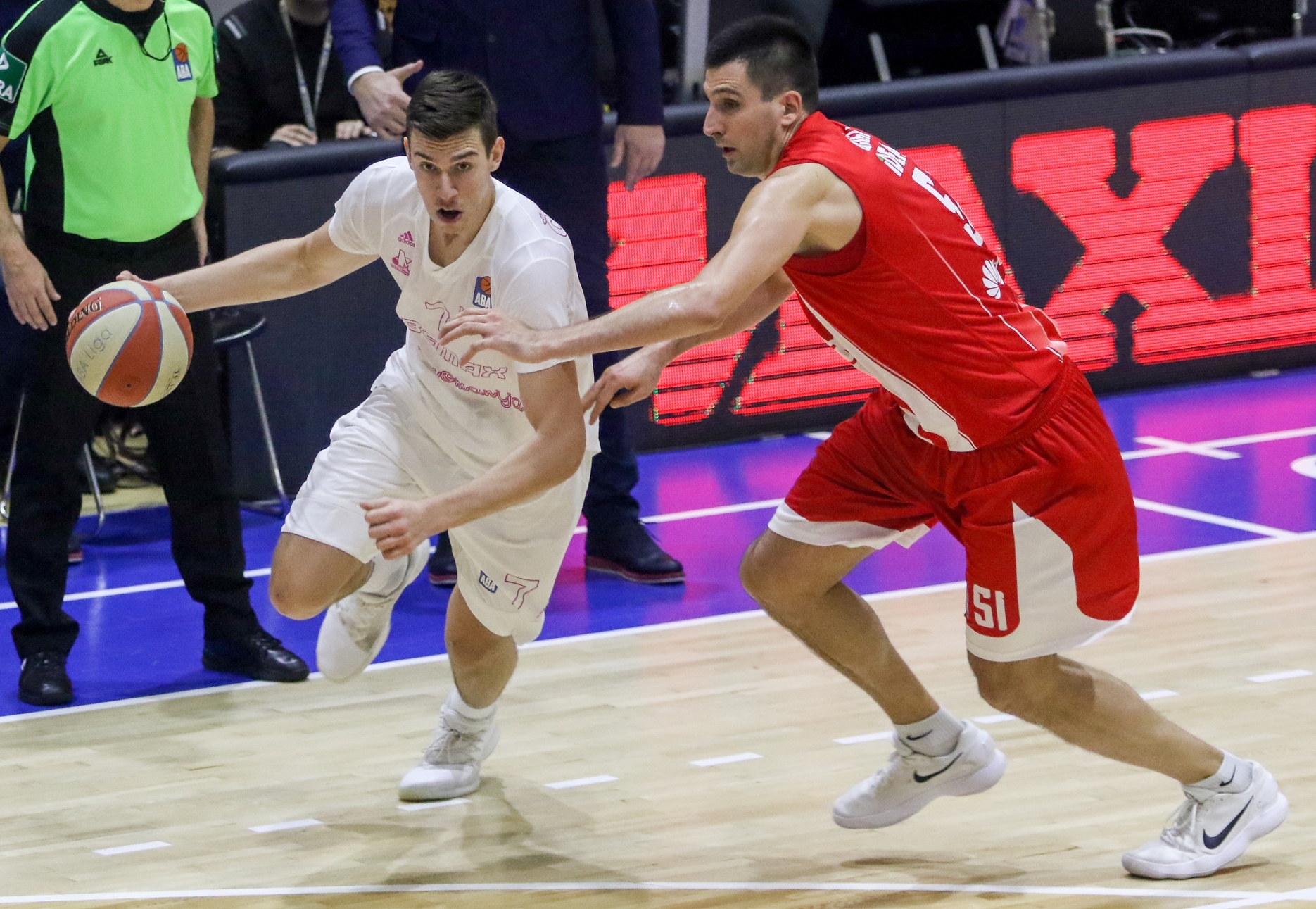