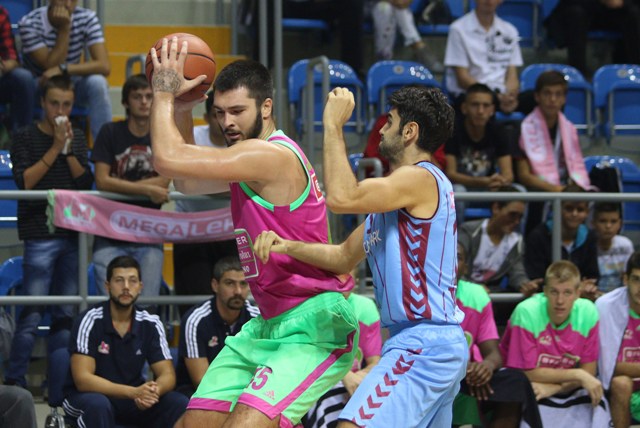 Players from Mega Leks on Monday, 19th of October at 9 PM will play against Igokea in match of the 6th round of ABA league. Mega wil play this game for a third victory in a row. Team of Dejan Milojevic will be weakened by the absence of earlier injured Zagorac and Kaba but also without Predrag Samardziski who broke nose and will miss the next two matches.

Both teams in the previous 5 rounds recorded at 3 wins and 2 losses. In ABA league they have met 4 times and the current score is 3-1 in favor of Igoka. In the last meeting within the 26th round of last season in the ABA league, Mega Leks celebrated in Sremska Mitrovica 100:96.

Coach of Mega Leks Dejan Milojevic emphasizes that this game comes at a difficult time:

“We host a Igokea who opened the season very well and showed high ambition. Capin and Radivojevic are in great shape at the start of the season. On a previous injury in our team were supplemented by another because Pedja Samardziski broke nose and will not be able to play the next two matches. We need to go further, we can expect a tough match but I believe that with the aggressive defense we can get to the victory which would have meant a lot for us”,

Nikola Jankovic emphasizes that the match against Igokea is of great importance for the team:

“Before us is a very important game. We want to keep 100 percent score at home and at the same time to get to the third victory in a row, which is very important to us to make further progress on the table. Igokea is a very good and experienced team, but we have shown that despite the respect for the opponent, on every match we’re going for win.Support of audience in Sremska Mitrovica for us is extremely important and I believe that on Monday they will have the opportunity to enjoy a quality basketball and hopefully our another win”,

Match between Mega Leks and Igokea begin on Monday 19th of October at 9 PM with live broadcast on the Arena Sport. Tickets for the match are sold at a price of 200 dinars for the stands and 500 for VIP seats.