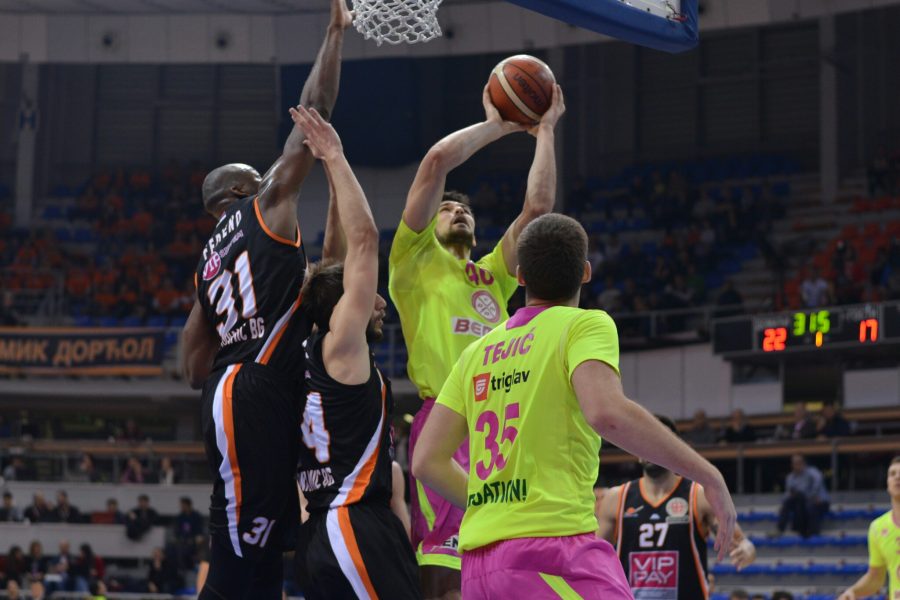 Players of Mega Leks qualified for the semi-finals of “Piraeus Bank – Radivoj Korac Cup” as they in the hall Cair in Nis convincingly defeated Dynamic with 84:57 (26:17, 21:12, 26:10, 11:18). Players of coach Dejan Milojevic played a very good match against the leader of Serbian League as key advantage was achieved in the first half which ended with a plus 18, 47:29.

Mega is in this match played without Zagorac that had poisoning, and the match didn’ finish Rebic, who due to a blow to the knee left the game in the first quarter. The first minute on the court after returning to the ranks of Mega Leks had Predrag Samardziski who in 14 minutes had 5 points and 5 rebounds.

Best in the ranks of Mega Leks was Jaramaz with 18 points and 7 assists, Mushidi scored 13 points and Kapetanovic 12, while in the team of Dynamic best was Stevanovic with 21 points. Mega Leks will in the semi-finals scheduled for Saturday at 21:00, play against the winner of the match Partizan NIS – Dunav.

Dejan Milojevic started the match with the following five: Novak, Jamaraz, Mushidi, Spasojevic and Kaba. Mega started the match with 5:0 but Dynamic responded and took the lead, 6:8. Mega has since played excellent in defense, which resulted in several steals and easy points in the attack. Jaramaz connects several points with two great dunks and Mega first quarter ends with 26:17, but also with injury Rebic, who due to a blow to the knee had to go out of the game and didn’t returned.

Players of Mega have continued to perform well at the start of the second quarter and came to plus 14, 34:20. Efficient was Mushidi and a new energy in the defense has brought Simeunovic. Advantage grew by the minute. Marelja connects several points, however, the half time ended with 47:29.

After a break at half-time, in game for the first time this season entered Predrag Samardziski who very fast scored points after offensive rebounds. This was followed by a new series of players of Mega after which the advantage grew to 31 points, 63:32. Samardziski excellent used minute on the field and the best move was seen after Samardziski in quarterback style threw pass to Simeunovic who behind the back assisted Spasojevic for easy layup.. The result at the end of the third quarter was 73:39.

In the last 10 minutes the players of Mega routinely detained match to the end for the final 84:57.