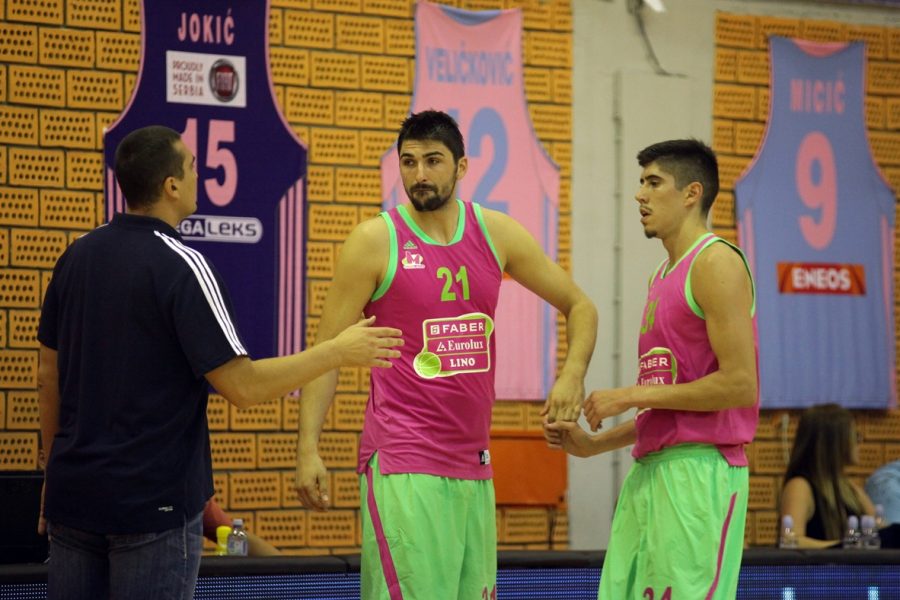 On Friday, October 30th from 9 PM Mega Leks will in Sremska Mitrovica welcome Sutjeska in the 8th round of ABA league. Players of Dejan Milojevic will try to extend their record to the 5th consecutive triumph. After another victory in an uncertain match in Celje against Tajfun, players of Mega Leks again showed character in the key moments of the match. Compared to this match, Mega Leks will be stronger for Predrag Samardziski who returns after two matches due to the nose injury. Out of this match are long injured Rade Zagorac and Alpha Kaba.
Coach of Mega Leks Dejan Milojevic does not expect an easy match:
“Sutjeska has shown quality on the away matches also, where they defeated Olympia and played some good games. We need to provide the utmost in defending with more energy on the court. Compared to the previous two games, we will be stronger for Samardziski who returns to the team from injury and he will certainly mean a lot in this game is very essential for us”.
Mega Leks is after 7 rounds at the second place in the league with 5 wins and 2 losses while Sutjeska has a score of 2-5.
Predrag Samardziski didn’t play in previous two matches due to nose injury:
“The worst feeling is when I can’t help the team and I feel like to run to the floor. I am glad that we get these very important wins. Although we are a very young team, a character that we showed so far as these four wins in a row, we have right to accept the role of favorites that we were assigned by the media in this match. We have to impose our rhythm on the game, play aggressive defense and fast transition to reach the desired result”,
Samardziski said and continued:
“Sutjeska has two wins so far but with a little luck certainly could have more of them. They are debutant in the ABA league but have a few experienced players in the team. Nobody is underestimating tgen and from the first minute we have to play engaged. We must not get into a situation like in some previous matches to go after a big difference because not all the teams will allow us to get back in the game. The first half of Celje could be a recipe for this game  and I believe our new victory. I invite the audience in Sremska Mitrovica to support us because each match is extremely important for us and I believe that we will repay them with quality and beautiful basketball”,
Samardziski finished.
The match is scheduled for Friday 30th of October, from 9 PM in the PSC Pinki in Sremska Mitrovica and tickets are sold at a price of 200 dinars for the stands and 500 dinars for VIP seats. Live broadcast of the match is on TV Arena Sport.
Photo: Mega Leks
Share Post: