The best scorer of the final tournament is Jovan Vojinovic from Mega Leks who scored 60 points in two games. A prize for presented to him by a famous ex-national team basketball player and vice president of KSS in charge of men basketball, Igor Rakocevic.

The game started with a better play of Mega Leks who had maximum nine points advantage (18:27) in the ninth minute. Jovan Vojinovic was especially in the zone and scored 13 points in first quarter.

In the second quarter Partizan played much better and took nine points advantage but Mega responded through Music and Vojinovic and half ended with minus five, 50:45.

Third quarter was equalised till the finish of period, when Mega took control of the match after the three points of Music, took the seven points lead (64:71).

Last quarter began with two triples of Music which took Mega to plus 12, after which the advantage of Mega Leks has not lowered below 10 point in the rest of the game. In the middle of the last period, Mega Leks took lead of maximum 19 points (70:89) which Partizan lowered to 10 points difference at the end of the game.

The best in Mega Leks were Jovan Vojinovic with 28 points, 5 rebounds and 3 assists, Novak Music with 27 points, 4 rebounds, 7 assists and 5 steals (32 PER) and Matija Jokic with 8 points, 8 rebounds and 4 assists. Milos Novakovic was best with 17 points and 9 rebounds.

This was great success for cadets of Mega Leks who managed to rise after the lost game in semi-finals against Sports World which was lost in the thrilling finish with 89:92, and after that won well-deserved bronze medal. 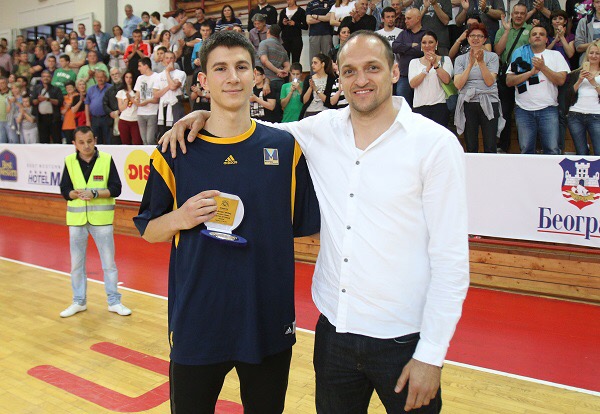