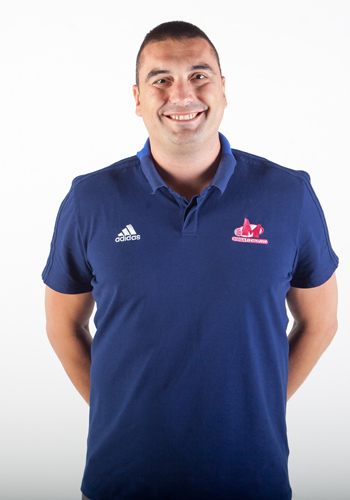 Basketball Magic has always been very strong in Dejan Milojevic. You could see it from the first day when he came to practice in Beovuk. Although with a height of 201 centimeters, he was the master of the paint, with almost incredible feeling for rebound. So the boy who was born on 15th of April 1977. in Belgrade, was very quickly given the nickname Serbian Charles Barkley, the first of many that were intended to describe the dominance that was rarely seen.

Playing career led him into the FMP, Buducnost, Partizan, Pamesa and at the end of Galatasaray. All the while double double performance was his trademark, wove himself many trophies and three times was the MVP of the ABA league. In particular, he will be remembered that in Partizan on 12th of February 2004th Euroleague match against Olympiakos finished with index 55.

He was the European Champion with the national team in 2001. And that was the only additional confirmation that Dejan Milojevic possessed exceptional class.

Injury of knee in 2009. kept him away from the court, but there was no doubt that Milojevic will return to his first and greatest love – basketball.  He did it  three years later when he switched jersey suit and took the helm Mega. It took him very little time to leave an indelible mark. He led team in season 2015/16 to the best results in its history, with remarkable progress of players, among which many will share their career before and after work with Dejan Milojevic. Boban Marjanovic and Nikola Jokic are just some of them.Currently, nine players of Mega have been drafted by the NBA clubs after working with him.