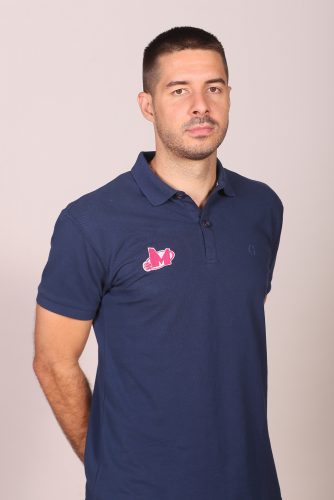 Milenko Tepic was born on February 27, 1987 in Novi Sad and in his rich playing career, in addition to Mega, he also played for Vojvodina, Partizan (twice), Panathinaikos, Sevilla, Lietuvos Rytas, PAOK (twice), Orlando, Brindisi , Varese and Iraklis. With Panathinaikos he won the Euroleague in 2011 with two titles in Greece, while with Partizan he won nine trophies (three ABA leagues, four Super Leagues and two Radivoje Korac Cups). Tepic also won four gold medals at the European Championships in the youth national team selections and with the first team Serbia won silver at the European Championship in 2009 in Poland.

After the 2020/21 season in which he played for Mega, he ended his playing career and then immediately joined Mega’s coaching staff as a Team Manager.